Prayer is Greater than Sleep 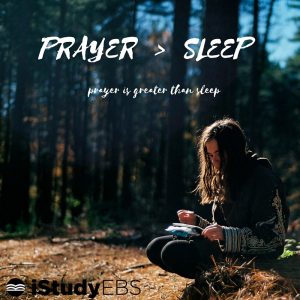 Mark 1:32-35 “32 That evening at sundown they brought to him all who were sick or oppressed by demons. 33 And the whole city was gathered together at the door. 34 And he healed many who were sick…35 And rising very early in the morning, while it was still dark, he departed and went out to a desolate place, and there he prayed.”

Did you catch the emphasis there? It has now reached “evening at sundown” and Jesus begins to heal many. Who knows how long it would have taken. The Scriptures record that the “whole city” gathered at the door and Jesus was casting demons out and healing them all. This could have easily lasted well into the night.

Now, if I were Jesus and I just had a long night of ministry my first thoughts may be to sleep-in the next morning to get caught up on my rest for the next day. After all, I did just work some long hours.

But Jesus does something different here. The following verse says that he rose very early in the morning while it was still dark to pray. There is an emphasis here that Mark is adding; not only is it “very” early, but he points out that it is still dark.

Jesus does something that may seem a bit uncommon. He stays up late doing ministry and wakes up extra early to pray before he goes out into ministry that day. And why did Jesus do that? He did it because he knew that sleep wasn’t his primary source of energy for the next day- it was prayer.

Is that how we live? Do we go out of our way to wake up extra early to pray so we can have the God-given strength to last us through the day? Do we rely on the power that comes only from God or are we too focused on the things “of this world” (ex. extra sleep, more time off, more caffeine)?

**Now of course, I am not saying we should disregard sleep or drinking coffee in the morning, but what I am trying to push is that we need prayer more than all other things. Prayer alone can give us the strength and power that we need to go throughout the day.**