Do I Have a Witness? 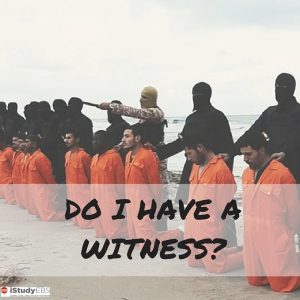 This video is an impactful testimony of the importance and power of a witness. In the video twenty-one captives are shown. The first twenty men were given the opportunity to deny Jesus, but instead they claimed Him as Lord. Mathew Ayairga, the twenty-first man, on the other hand, was not a Christian. After seeing his twenty fellow captives beheaded for their faith in Jesus, he trusted their Lord as his own and joined them in eternal life.

While we may never have our faith tested like these twenty men, how we live our life every day is the evidence of God’s presents and position in our lives. This witness can have the same life transforming power in someone’s life as Mathew experienced. And that power isn’t us but Jesus living in and through us. We don’t get up in the morning knowing we’ll be beheaded and wanting to make it count for something. We get up thanking Jesus for another day to live with and for Him in the life He has called us to…be it at home, at work, at school, driving, jogging, talking, texting, whatever and wherever He leads us. That’s where it counts because that’s where Jesus light will shine. Yield to His plan, just as Mathew did and watch and be amazed.

Let’s choose to follow the example of these brave men who chose to use even the worst situations to glorify God and be witness to the world.