4 Steps to a Beautiful Life 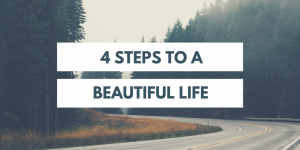 Some lives are adventurous. Some lives are depressing. Others are simple. But Abraham’s life was beautiful. He was just a normal person like you and me, but he maintained four practices that led him to and allowed him to live a life that was overflowing with beautiful, enriching, and satisfying moments. So what was his secret?

1. He walked with God

The Lord was Abraham’s best friend. They were close and near to one another. Talking to God, for Abraham, was not a “Sunday thing”, it was an every day, every situation kind of thing. The same must be true for us. We need to walk with Him. The Lord needs to be our near and dear friend. Learn to invite God into every aspect of your life. The big. The small. The ugly. The mundane. All of it.

2. He was Obedient to God and His Word

When God spoke, Abraham’s response was to obey. I am sure that at times Abraham wondered or even questioned what on earth God was doing. I can only imagine what was going through Abraham’s mind when the Lord asked him to sacrifice Isaac, the promised son, to Him. However, Abraham chose to obey God instead and in return the Lord rescued Isaac from death. Likewise, whatever situation occurs in life choose to obey God and His Word.

3. He Represented the Lord with His Life

Abraham was a man called out of darkness. He was God’s ambassador. Anyone who knew him would know that he was God’s man! He indeed was a representative for Him everywhere he went. We need to make it a daily practice to accurately represent the Lord with our lives. Whether we are in the grocery store, at work, at home, or alone; our lives need to reflect the goodness and holiness of our God.

Hebrews 11:8-9, “By faith Abraham, when called to go to a place he would later receive as his inheritance, obeyed and went, even though he did not know where he was going. 9 By faith he made his home in the promised land like a stranger in a foreign country”
It looks different for everyone, but the same truth holds. We must be men and women of faith. Believing in who God says He is, what He says He will do, and His biblical promises. We must be like Abraham and have a grounded and sure faith in our God.

What other practices do you think Christians should live by? Tell us below!